Delhi Law Academy is just the right place for RJS preparations.
We excel in law teaching. All law subjects are personally taught by Madan Sir.

OUR CLAIM
• We do not claim that each and every student who joins us will clear the exam [because, quite honestly, no one can make such a claim]

• We do, however, claim that we would impart a substantial knowledge of law to all who join us and we would clear their fundamental concepts of law

OUR USP :
OUR OUTSTANDING FACULTY

Madan Sir is a passionate Law teacher
He is a great teacher because:
• He possesses a deep and thorough knowledge of law
• He has a god-gifted ability to deliver this knowledge to his students
This twin quality of possessing the required knowledge and having the ability to express it is reflected in these twin facts:
• He was Delhi University Law Centre Topper and Gold medallist in his LLB degree program
• He was Indian Law Institute New Delhi Topper in his LLM entrance exam
His simple yet lucid explanations for even the most complicated legal principles became the stuff of legend.
At Delhi Law Academy, Madan Sir teaches the RJS course himself: we do not hire faculty irresponsibly chasing growth.

STUDENT TESTIMONIALS
At DLA, we have never featured testimonials of our Judicial Service students because:
• We believe that our students succeed because of their own hard work, though undoubtedly we help them enormously through relentless efforts of our superb faculty.
• We believe that a coaching institute can take credit for its faculty, teaching techniques, classroom, study material and notes but not for its students’ calibre and hard work.
Selected Awards of Prof K Madan
• Awarded in 2010 by Hon. Chief Justice of India, Justice Altamas Kabir

• Civil Services All India Rank 45
THIS IS WHAT WE TEACH
RESERVATIONS IN INITIAL APPOINTMENTS:
Article 16(4)
• This Article does not prevent the State
o from making a provision for reservation of appointment
o in favour of a backward class of citizens
o which is not adequately represented in services under State

Decision
• Clause (4) of Article 16 is not an exception to clause (1). It is an instance and an illustration of the classification inherent in clause (1).
Issue 2
• Whether Article 16(4) is exhaustive of the concept of reservations in favour of backward classes?
Decision
• Article 16(4) is exhaustive of the subject of reservation in favour of backward class of citizens.
Issue 3
• What is the meaning of the expression “backward class of citizens” in Article 16(4)?
Answer
• A caste can be and quite often is a social class in India. If it is backward socially, it would be a backward class for the purposes of Article 16(4).
• Among non- Hindus, there are several occupational groups, sects and denominations, which for historical reasons, are socially backward. They too represent backward social collectivities for the purposes of Article 16(4).
Issue 4
• Should ‘creamy layer’ be excluded?
Answer
• ‘Creamy layer’ can be and must be excluded.
Issue 5
• To what extent can the reservation be made? Whether the 50% rule enunciated in Balaji a binding rule or only a rule of caution or rule of prudence?
Decision
• The reservations contemplated in clause (4) of Article 16 should not exceed 50%. While 50% shall be the rule, it is necessary not to put out of consideration certain extraordinary situations inherent in the great diversity of this country and the people.
Issue 6
• Whether clause (4) of Article 16 provides reservation only in the matter of initial appointments or does it provide for reservations in promotions as well?
Decision
• Article 16(4) does not permit reservations in matters of promotions.

RESERVATIONS IN PROMOTIONS:
Introduced by the 77th Amendment Act of 1995
Article 16(4A)
• This Article does not prevent the State
o from making a provision for reservation in matters of promotion
o in favour of SCs and STs
o which are not adequately represented in services under State

Supreme Court on Articles 16(4A):
M. Nagraj v. Union of India [2006] • The constitutional amendments by which Articles 16(4-A) and 16(4-B) have been inserted flow from Article 16(4). They do not alter the structure of Article 16(4).
• They retain the controlling factors or the compelling reasons, namely, backwardness and inadequacy of representation which enables the States to provide for reservation keeping in mind the overall efficiency of the State administration under Article 335.
• They do not obliterate any of the constitutional requirements, namely, ceiling limit of 50% (quantitative limitation), the concept of creamy layer (qualitative exclusion), the sub-classification between OBCs on one hand and SCs and STs on the other hand , the concept of post-based roster with inbuilt concept of replacement.
• The State concerned will have to show in each case existence of the compelling reasons, namely, backwardness, inadequacy of representation and overall administrative efficiency before making provision for reservation.
• The State is not bound to make reservation for SCs/STs in matters of promotions. However, if they wish to exercise their discretion and make such provision, the State has to collect quantifiable data showing backwardness of the class and inadequacy of representation of that class in public employment in addition to compliance with Article 335.
• Even if the State has compelling reasons, the State will have to see that its reservation provision does not lead to excessiveness so as to breach the ceiling limit of 50% or obliterate the creamy layer or extend the reservation indefinitely.

Supreme Court revisited M Nagraj in
Jarnail Singh v. Lachhmi Narain Gupta [2018] • The 2006 directions on collecting quantifiable data on the backwardness of SC/STs were contrary to the 1992 judgment by a nine-Judge bench.
• The states were not required to “collect quantifiable data” reflecting the backwardness among these communities.
• SCs and STs were the “most backward or the weakest of the weaker sections of society” and presumed to be backward.
***********
THIS IS HOW WE TEACH
• The entire teaching is through Power Point presentations
• Genuine English Medium teaching
• Exam oriented approach
• Special emphasis on Concept-clearing, Answer-writing and Judgment-writing
• Regular weekly tests for Pre and Mains
• Complete solutions of past papers, both Pre and Mains
• Interactive teaching
• Case law approach
• Selected Notes
• Regular Homework 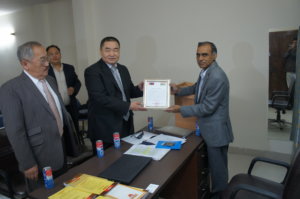 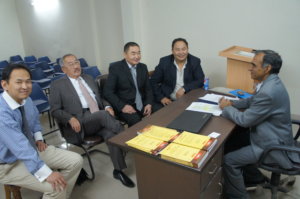