ONE NATION, ONE RATION CARD

About One Nation, One Ration Card Scheme

o            It focuses poorest of the poor families among BPL beneficiaries.

o            The boundary dispute in the Western Sector (Ladakh) pertains to the Johnson Line proposed by the British in the 1860s that extended up to the Kunlun Mountains and put Aksai Chin in the then princely state of Jammu and Kashmir.

✓           India used the Johnson Line and claimed Aksai Chin as its own. China, however, do not recognise it and instead accepts McDonald Line which puts Aksai Chin under its control.

o            In the Middle Sector (Himachal Pradesh and Uttarakhand), the dispute is a minor one. Here LAC is the least controversial except for the precise alignment to be followed in the Barahoti plains. India and China have exchanged maps on which they broadly agree.

o            The disputed boundary in the Eastern Sector (Arunachal Pradesh and Sikkim) is over the McMahon Line (in Arunachal Pradesh) decided in 1914 in a meeting of Representatives of China, India, and Tibet in Shimla. o            Post-independence, bilateral ties between India and Taiwan ceased to exist when in 1950 India accorded diplomatic recognition to People’s Republic of China (PRC).

o            Further, during Cold War, even informal ties between New Delhi and Taiwan remained remote, as Taiwan joined the US-led block and India the nonaligned movement.

o            This changed in the 1990s when Indian Government reoriented India’s policy towards Taiwan in the face of India’s domestic economic crises and foreign policy challenges.

o            India and Taiwan set up unofficial relations in 1995 with establishment of the IndiaTaipei Association (ITA) in Taipei (Capital of Taiwan).

o            This road connects close to the Line of Actual Control and opens a new route for Kailash Mansarovar yatra via Lipulekh pass.

o            This will help pilgrims to avoid dangerous high-altitude routes through Sikkim and Nepal. 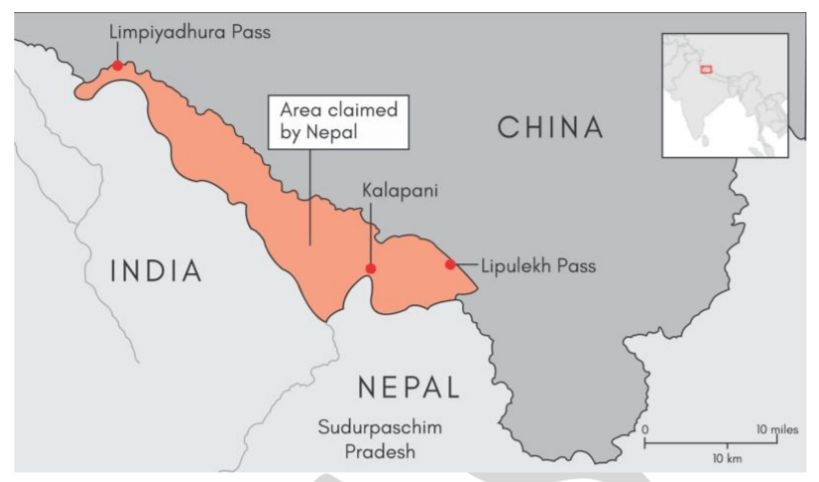 India lodged a strong protest against Supreme Court of Pakistan order on the Gilgit-Baltistan region. NAM’s first conference - The Belgrade Conference held in 1961 under the leadership of India, Yugoslavia, Egypt, Ghana, and Indonesia.

o            Mutual respect for each other’s territorial integrity and sovereignty

o            Non-interference in each other’s military and internal affairs

The Prime Minister has announced Rs. 20 lakh crore stimulus and to ensure that all facets of the economy are addressed, 4L - Land, Labour, Liquidity and Laws all have been emphasized in this package.

o            First Pillar is Economy, emphasizing on Quantum Jump rather than Incremental change.

o            Third Pillar is Our System, a special reference has been made to technology and contemporary policies as part of this system.

o            Desert locusts are usually restricted to the semi-arid and arid deserts of Africa, the Near East and South West Asia that receive less than 200 mm of rain annually.

o            The sustainable use of the components of biological diversity.

o            The fair and equitable sharing of the benefits arising out of the utilization of genetic resources.

o            According to this doctrine as defined by the Supreme Court, the enterprise owes an absolute and non-delegable duty to the community to ensure that no harm results to anyone on account of hazardous or inherently dangerous nature of the activity which it has undertaken.

o            Under the “strict liability principle”, a party is not liable and need not pay compensation if a hazardous substance escapes his premises by accident or by an “act of God’” among other circumstances.

o            There would be no adverse impact on the river’s ecology as the observatory is being constructed on a Sultanganj-Aguwani Ghat bridge over the Ganga.

o            They prefer deep waters, in and around the confluence of rivers. They can only live in freshwater and are essentially blind.

o            They are reliable indicator of the health of the entire river ecosystem.

Other dolphins found in India

Products to which GI tags were granted

o            It is a traditional and ritualistic mural art being practised by local tribal women in the area of Hazaribagh district of Jharkhand.

o            Rural-urban differential has also narrowed. However, birth rate has continued to be higher in rural areas.