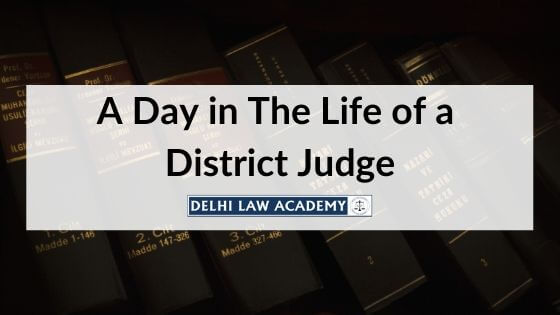 Judge is the highest and the most respected position in the legal/ judicial system of India. Judges are impartial decision-makers in the pursuit of justice and they rule on questions of law. The life of the district judge is similar to the referee of cricket, where the judge acts as a referee between the litigating parties and renders decisions in legal disputes.

A judge presides over a court of law. It’s his/her job to hear all witnesses and examine the evidence presented by the litigating parties in a case, assess the credibility of the charges made and then issue a ruling on the matter based on his or her judgment. You should be very objective and prepared to listen to both the parties patiently.

Appointment of district judges as per the Constitution of India, 1949 is as follows:

A day of a District judge would look as follows:
9 am: Attend cases and listen to the parties
11 am: Work continues with a string of cases one after the other
1 pm: Lunch
2 pm: Resume hearing
4 pm: Go to the chamber and read the files for the next day’s cases
5 pm: Done for the day

Each state is divided into judicial districts presided over by a District and Sessions Judge. He is known as a District Judge when he presides over a civil case, and a Sessions Judge when he presides over a criminal case. He is the highest judicial authority below a High Court judge. In addition to the district judge, there may be a number of Additional District Judges and Assistant District Judges depending on the workload. They are known by different names in different states.

The judges of district courts are appointed by the Governor after consultation with the Chief Justice of the High Court of the concerned State. The necessary qualification to become a district judge is a minimum of seven years of practice as an advocate or a pleader.

District judges are also appointed by way of the elevation of judges from courts subordinate to district courts provided they fulfill the minimum years of service.

In this blog post, we have explained a typical day of the judge. All the powers, responsibilities and routine is explained above. Hope you liked our post. Do not forget to share your views in the comment section below.

For our Judiciary Study Material please click on the link given below.